Portrait of the Artist as a Rookie Cop 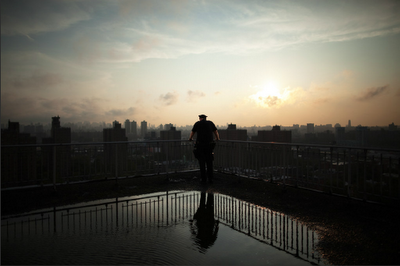 "The photographs of Antonio Bolfo, a Rhode Island School of Design graduate and former NYPD patrolman who took artistic photographs while on the job, humanize both officers and civilians. So says the The New York Times. But is this true? And if it is, does it matter? As to the civilians: when a cop says 'cheese,' do you have any choice but to smile? And as to the cops, the Times seizes on the photographs of police officers relaxing on the roofs of New York City Housing Authority facilities as emblematic of their much talked about humanity.

'This is like a safe haven for them,' Bolfo tells the Times. 'Kind of like, collect their thoughts, talk to their loved ones, be people. Shed their police persona and relax a little bit.' It is a place forbidden to civilians. The intensity of the relief this seclusion brings the officers is inverse to their connection to the community. The more they are merely foreign occupiers, the more they enjoy the view, a view that the very residents of the buildings on which they so symbolically trod are not allowed to enjoy. It is just another of those petty asymmetries that separates them from us, the things they can do but you cannot, no different from the way they demand free coffee at diners, run red lights for no reason, illegally park their vehicles, make their friends’ tickets disappear, distribute their union cards to family members so they get preferential treatment, raise their voice at you on a whim, place their hands on you to 'guide' you to compliance with their instructions, slam you on the pavement for arguing with them, shoot your dog, break down your door and tear apart everything you own—no different than the way that Mr. Bolfo got to take photographs of police at work because he was an officer when today even journalists are arrested for doing their jobs.

But, no. Perhaps there is a difference. Most of the perks of being a police officer have to do with the wanton exercise their power over others or with the license to transgress with impunity. Let’s leave aside the oppression of residents that makes these rooftop reveries the exclusive privilege of NYPD and landlords, as well as the fact that officers go on roofs as often to spy on the streets below as to relax. For a brief interval, when officers go to the roof, they can unburden themselves of the continuous, tedious labor of suspicion. They do not have to squint, do not have to surveille, they can just... see. Let’s be honest, if the rooftops were public, they wouldn’t be nice anymore. They would be filthy, dangerous shitholes, just like the rest of the neighborhood. The many must be excluded so that the few may have the privilege of aesthetic contemplation. After all, isn’t that the way Art works? 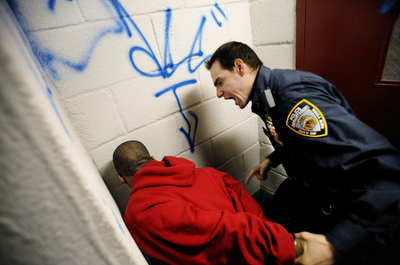 Labels: the fingerpainting of the white glove of the invisible hand